Government-backed inspectors should be able to investigate companies and entire industries to prevent unscrupulous companies falsely labelling workers as self-employed, according to a leading legal body.

In a submission to the independent review of employment practices led by Matthew Taylor, the Law Society also recommends the immediate scrapping of employment tribunal fees, which have led to a 70% fall in claims in the last three years. It also says every worker should receive written clarification of their employment status.

It suggests that the Gangmasters and Labour Abuse Authority, which already has some investigatory powers over food and farming operators, could be handed responsibility to carry out investigations into employment status in all businesses. 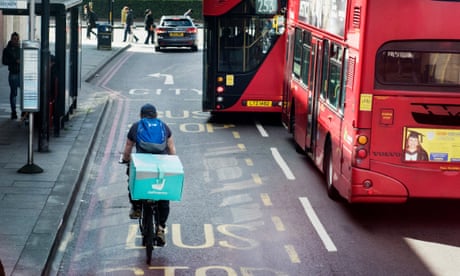 The Taylor review, which was commissioned by the government last year, is expected to publish recommendations in the next few weeks.

“Our rights at work are not optional – they are the minimum standard to which we are entitled,” said the Law Society president, Robert Bourns. “Our law relies on individuals taking their employer to court to get their rights recognised – a task that is simply beyond most people. Bad employers know this and take advantage of it to cut corners and underpay people, knowing they’ll probably get away with it.

“An independent government inspector who can go into a business to ensure staff are being given their proper workplace rights will help put a stop to this exploitation, and put everyone on a fair and even playing field.”

The rise of platforms including Uber, Deliveroo and online retailers, most of which say their drivers and riders are independent contractors, has led to growing concern that millions are stuck in insecure and stressful work in the gig economy.

Self-employed independent contractors are not entitled to holiday pay, sick pay or pension contributions. In contrast those categorised as workers have a degree of independence and can be self-employed but they are also entitled to limited rights including the national minimum wage and holiday pay. The most secure are employees, who have full rights including entitlements to flexible working, maternity pay and sick pay.

The importance of these categories has been highlighted by a string of tribunals led by trade unions questioning the status of drivers and riders including successful cases brought by cycle couriers at CitySprint and Excel and drivers for taxi app Uber. All three cases found the riders and drivers were workers.

Evidence suggests a significant minority of employers are circumventing employment protection legislation. Research from Citizens Advice in 2015 suggested that one in 10 people, or about 460,000, have been mislabelled self-employed. In January, the TUC reported that the number of people without guaranteed hours or baseline employment rights had risen by more than 660,000 (27%) over the past five years.

The Law Society suggests a comprehensive review of employment legislation and clearer definitions of employment categories. It says all businesses should be forced to clarify the status of their workers in writing.

Taylor has said he is considering allowing workers to check directly with the government whether attempts by companies to class them as self-employed are legitimate. He is also considering whether to give agency workers on variable hours the right to request a permanent contract after a certain period.

© 2022 AS Solicitors All Rights ReservedAuthorised and Regulated by the SRA Firm Number: 423968
Complaints Handling Procedure